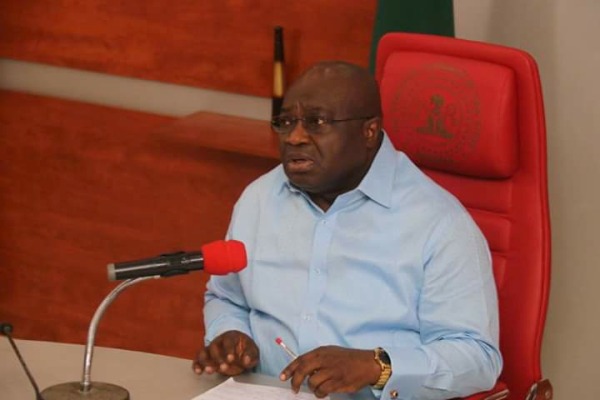 FIC Report (Abia State) – The Abia State government has described as barbaric and unfortunate the abduction of a Distinguished Fellow of International College of Surgeons on Friday, June 9, 2022, the former Chief Medical Director (CMD) of Abia State University Teaching Hospital (ABSUTH), Prof. Uwadinachi Iweha by some gunmen on Thursday, even as it assured Nigerians of the government’s determination to rescue him unharmed.

It will be recalled that some unknown gunmen Thursday night abducted the 74-year-old Fellow of International College of Surgeons and Pioneer CMD of Abia State Specialist Hospital and Diagnostic Centre, Umuahia in front of his country home in Umuajameze, Umuopara in Umuahia South LGA of Abia State.

Following his abduction, Doctors in the State on Friday held a peaceful protest, asking the state government to put the machinery in motion that will lead to his immediate release, warning that “if not, in the next 48 hours, we will embark on strike”.

However, Abia State government in a statement in Umuahia on Sunday revealed that Governor Okezie Ikpeazu is pained by the dastardly act given the age and fragility of the highly reverred Surgeon, even as the government asked its citizens to remain calm.

The statement signed by the State Commissioner for Information and Strategy, Barr. Eze Chikamnayo, assured that the government will leave no stone unturned in ensuring the release of Erudite Scholar from the hands of his abductors.

Full text of the statement titled the “Unfortunate Kidnap of Prof Uwadinachi Iweha” reads: the attention of the Abia state Government has been drawn to the barbaric and unfortunate kidnapping of Prof Uwadinachi Iweha, a 74-year-old Fellow of International College of Surgeons who has served our dear state and humanity meritoriously as the CMD of ABSUTH as well as Abia State Specialist Hospital and Diagnostic Centre respectively. “The security conscious governor of Abia State, Okezie Victor Ikpeazu PhD, is particularly pained by this dastardly act given the age and fragility of health of this distinguished Abian.

“In the last seven years, under the present government, the medical community and indeed all Abians have enjoyed peace and security through the pragmatic and proactive approach of Governor Okezie Victor Ikpeazu. In this particular instance, government is leaving no stone unturned.

“We are identified with the Nigerian Medical Association, the family and other stakeholders at this critical time and urge all stakeholders to work quietly together at this stage towards guaranteeing the safety of Prof. Uwadinachi Iweha and other citizens in the custody of these evil men.

“By the grace of God, as a responsive government charged with the responsibility of security and welfare of Abians everywhere, we are currently deploying all necessary measures and resources to secure the release of Prof Iweha.

“We therefore, appeal to all citizens to remain calm and maintain the peace while we diligently do the needful”.

Relatedly, in furtherance of the government’s determination to stamp out the menace of Kidnapping and killings by terrorists in and around the Umunneochi LGA and to give immediate effect to the decisions reached after his wide consultation with Stakeholders, the Governor of Abia State, Dr. Okezie Victor Ikpeazu has authorised the immediate constitution of a Special Security Situation Room for the Area.

Members of this Committee are to liaise with the Security Agencies and all other necessary Institutions to provide succour to the citizens of our State resident in Umunneochi and ensure proper monitoring and implementation of Government Directives in that regard.

This Committee will be inaugurated on Thursday 16th June by the Governor at the Exco Chambers by 12 pm, all Members of the Committee are to be seated by 11:30am before the arrival of the Governor.